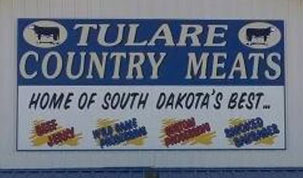 
Nathan Genzler got an early start in his career. As a child, he would visit Tulare Country Meats, the butcher shop where his dad worked, after school. When he was about 8 years old, he was told that if he was going to be there, they were going to put him to work. “I’ve been here ever since,” he says.

Owners Rick and Jane Whitley started talking about selling the meat processing business in Tulare, South Dakota to Genzler years ago. In November of 2017, with the help of a Northern Electric REED fund loan, Genzler acquired the business, along with its equipment, inventory and accounts.

Tulare Country Meats hasn’t changed much since the Whitleys sold the business. It employs 13 people, including Genzler. Most of the employees stayed on with the transition of ownership.

Customers can expect to find the same high level of quality meats and processing services at the locker as when the Whitleys ran it. “It’s done the way it always has been. They taught me how to do it. Anything I know how to do, they taught me,” says Genzler.

The locker provides custom processing of domestic livestock such as beef, pigs and sheep as well as wild game. It operates out of a leased facility in Tulare, which has a retail space in the front. Tulare Country Meats also has a shop in Huron to enable direct to consumer sales.

The business is known for its jerky and wide variety of meat sticks but it has a range of offerings such as chicken, steaks and brats. “When people come here they buy a little of everything. Most of them are return customers,” says Genzler.

The retail portion of the Tulare Country Meats business is unique. Genzler points out that there are other meat locker plants in the area, in Redfield and Mellette, but they only do processing, not retail sales.

This niche helps make Tulare Country Meats a success. Genzler points out that if his business wasn’t in Tulare, a town of about 200 people, customers would have to travel elsewhere to buy and process meat, taking money out of the community — to the town’s detriment. “If you don’t have businesses like this in a small town there won’t be a small town anymore,” he says.

Northern Electric’s REED fund was one of four loans that, when combined, enabled Genzler to buy the business. The 28-year-old says this financing was crucial. “I’ve lived in Tulare all my life but I don’t have a lot of money saved up,” he explains. “Without the lenders offering help with the loans, I would never been able to afford it.”